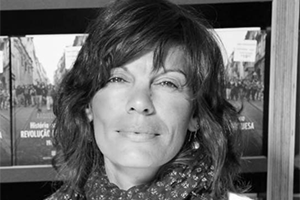 Raquel Varela is a historian, researcher and university professor at New University of Lisbon / IHC, where she coordinates the Study Group on Global Labour History /UNL). She is International visiting senior professor at the Fluminense Federal University and honorary fellow of the International Institute for Social History, where she co-coordinates the international project ‘In the Same Boat? Shipbuilding and ship repair workers around the World (1950-2010). She is an international evaluator of CNPQ / Brazil; Vice-Coordinator of the Portuguese Network for the Study of Labour, Labour Movements and Social Movements (RE).

She coordinated the labour network of the European Social Science History Conference in 2012-2014 – ESSHC. In 2013 she was awarded the Santander Prize for Internationalization of Scientific Production and in 2014 was nominated national scientific coordinator of the Historical Itinerary of 25 April 1974 – National Official Celebrations.

She is the president (2 mandates 2011-2013; 2013-2015) of the academic association International Association Strikes and Social Conflicts. Her main areas of interest are global labour history, history of labour relations, and contemporary history of Portugal.